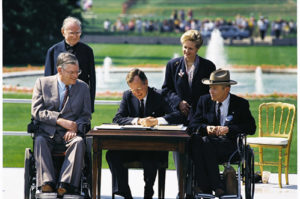 George HW Bush signs the ADA into law in 1990
I cried as I listened to a tribute to George H. W. Bush, realizing how much he impacted our lives. In 1990, he signed the Americans with Disabilities Act, which ensures that Todd has access to services and buildings that improve his quality of life.
Long before the ADA, culture and attitudes regarding people with disabilities were changing. The Rehabilitation Act of 1973 extended civil rights to people with disabilities. That law banned discrimination on the basis of disability by recipients of federal funds. The Department of Health, Education and Welfare established regulations to implement the law in 1977.
During the Reagan administration, Vice President Bush led the Task Force on Regulatory Relief, however Bush heeded the concerns of the disability community and ensured that society did not take a step backward, keeping intact the regulations that gave access to people with disabilities.
The regulations he supported ended up being the basis for the ADA, which extended the civil rights of people with disabilities to all public accommodations.
George H. W. Bush personally benefited from the bill he signed. After developing Parkinson’s disease, he still enjoyed getting out, even in his wheelchair.
Because we live in an old community, I can see what life would have been like if Bush hadn’t supported the regulations that came out of the Rehabilitation Act, or if he hadn’t signed the ADA into law.
Todd has no way to access many local businesses and restaurants that were built at the turn of the twentieth century and grandfathered into a perpetual state of inaccessibility. One step to enter a business is insurmountable in his 400-pound power wheelchair.
He couldn’t attend my daughter’s Suzuki violin recitals in the old building where I had attended elementary school. Last weekend, he easily wheeled into my son’s elementary school, which was built during Bush’s first year in office.
Our life outside of our accessible home is dictated by which buildings Todd can access. The church we attend. Restaurants we patronize.
He could attend the all-school production of The Little Mermaid, in which our daughter played the part of a princess. The historic Calumet Theatre has been modified to be accessible with a ramp going up to a side door. It is possible for him to get inside, but the old auditorium certainly wasn’t designed for wheelchairs with aisles too narrow and steep for safety or comfort.
Contrast that to the modern Rozsa Center for the Performing Arts at our local university, where we watched our daughter’s choir performance. We entered at ground level. He parked his chair next to companion seats, so our son and I could sit next to him with unobstructed views of the stage. We enjoyed the performance without logistical stress.
These may seem like little things to healthy people, but they make a world of difference in the life of people with disabilities. I’m so grateful we live in a society that values the least fortunate.
We could still do more. Hopefully in the next thirty years, we’ll see additional changes that would further improve life.
It’s difficult to travel even an hour from home, since most bathrooms and hotels do not meet the needs of those with paralysis. I imagine a country where accessible bathrooms and hotel rooms have overhead lifts. Freedom!
But traveling is the least of our concerns, given that life at home is still difficult. The biggest need for the ALS community is caregiving.
Through Medicare, we get three hours of caregiving assistance each week—two showers. However, Todd requires virtually twenty-four-hour assistance, including being turned at night so he doesn’t lie awake in pain and develop bedsores. I tried to provide that care, but my efforts were unsustainable, mentally and physically, after more than a year of not sleeping for more than an hour at a time. Now we, like many middle-class families with ALS, need to fundraise to pay out-of-pocket for help with the extensive care needed. It’s either that or sleep-deprivation for the spouse, which is what often happens.
Thank you to the friends and family who help us pay for Todd’s nighttime care.
We need Medicare reform so that families with severe disability can get a reasonable amount of home health care—so basic needs are met. After all, dealing with disability is something that might lie ahead for any of us or those we love. We are all one diagnosis or one accident away from paralysis.
at December 11, 2018