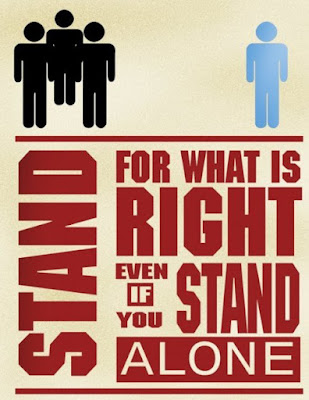 I learned this life-long lesson early in my career. Back in the early 1990s the economy was in a serious recession, the first Gulf War had just ended, and after more than a decade of heavy defense spending under Reagan and Bush 41, the government was cutting back. Many experienced engineers found themselves unemployed and had to take humiliating jobs working at Radio Shack; so I was lucky just to get the low-paying engineering job that I did.

The company I went to work for - LORAL - was notoriously one of the worst in the defense industry. They were cheap-skates! Nevertheless, the job was interesting and challenging, and I had one of the best managers I've ever worked for. I learned a lot in that job, but I had a family to support and left for a better paying job after a year-and-a-half.

About a year after leaving LORAL, I got a call from a lawyer asking me questions about my old boss. After I left LORAL, the company tried to hire my replacement. An experienced African-American engineer applied, but the company's managers blatantly discriminated against him. My old boss rightfully tried to expose their wrongdoing internally and they retaliated against him by firing him. Eventually, his lawsuit against LORAL for wrongful termination was settled out-of-court, and the case was dismissed with prejudice by the judge. My old boss just couldn't afford the legal battle with LORAL.

I'd like to tell you that the story of my old boss losing his job for doing the right thing had a happy ending. Unfortunately, he never really recovered professionally from his setback. But I can assure you that he has treasures stored up in heaven, and he made a lasting impression on me about doing the right thing regardless of the consequences. Years later, I too had to make a choice similar to his that cost me my job with another company.

Often times when we try to do the right thing...for the right reasons...the right things don't always happen. More often than not, the world doesn't reward us for doing the right thing. But I can assure you that God will reward us: if not in this life then in the next.
at September 26, 2015

Often times in our working lives, there’s little or nothing we can personally do to make a bad situation better.  Regardless of our personal belief system, if we’re working in a den of thieves it’s easy to be overcome by evil.  So we must know when to tough it out and endure it, when to quietly leave, and when to burn our bridges behind us.  Having the street smarts to out-maneuver, out-fight, or out-run our opponents will give us the endurance to continue fighting the war to stop dishonest, unethical, and immoral behavior at work and in business.

We cannot force or coerce others into behaving honestly, ethically, and morally.  We’re responsible for our actions, and they’re responsible for theirs.  After all, companies are human organizations, and when each person in the organization starts to act honorably and ethically eventually it’ll make a difference.  But if each person perpetuates the cycle of unethical behavior, conflicts, hatred, revenge, dishonesty, and immorality then things will only get worse.  As business stakeholders, we can ask ourselves what we’re doing today, tomorrow, next week, next month, or next year to satisfy the needs of all the other stakeholders?

Business owners who set unrealistic expectations on their managers will drive them to make unethical, immoral, or unfair decisions that harm the other stakeholders especially the employees.  On the other hand, if business owners set realistic goals and ensured their managers are treating their customers, employees, suppliers, and distributors the way they’d want to be treated, their business will thrive and everyone will benefit.

Investors who put money into profitable yet unethical companies just because they offer a high return on investment (ROI) are rewarding unethical behavior.  On the other hand, if each private investor decided only to invest in honest and ethical companies, in the long run, they’d earn higher dividends than ever imagined, and it would encourage the unethical companies to clean up their acts.  But it all starts with one investor making a choice to invest in companies that are honest, ethical, just, and fair with their customers, employees, suppliers, and distributors.

Managers who are dishonest, unfair, or habitually mistreat their customers, employees, suppliers, and distributors will only perpetuate this ethical crisis in business.  On the other hand, if managers acted as servants to those who work for them they’d become much better stewards to the owners and investors of the business, and they would earn the respect and admiration of their employees.  Paying workers just and fair wages, ensuring a safe and friendly work environment, and being honest and fair in every decision will go a long way towards making companies better places to work.

Workers who don’t give an honest-days-work for an honest-days-pay are not only hurting their employers, they’re hurting themselves and their families, and they’re sabotaging their own livelihoods.  On the other hand, if workers do the best job they’re capable of doing each day they’ll help their companies become more successful.  By working smarter and harder, improving our skills, getting along with others, showing up on time, and not leaving early will pay enormous benefits.

To a certain degree, each of us is responsible for the impressions others have of us.  What others think of us is a reaction to what we say and do.  If there’s a difference between what we say and what we do, people will naturally believe what we do.  If companies do not publicly praise and reward workers who do the right thing, then they’ll discourage others from doing the right thing.  A lot of companies protect powerful and unethical managers at the expense of honest and hardworking employees.  Rather than standing up for what’s right, they choose the more expedient alternative of looking the other way.

Shooting the messenger ensures that no one else will ever report that something’s wrong.  When honest and hardworking employees see good people sacrificed for unethical managers, they’ll learn not to stick their necks out.  And when employees stop reporting problems, companies eventually get into bigger trouble.  When employees start quitting in droves, maybe it’s an indication there’s something wrong with the management.  Nevertheless, you should always do your part to keep your company’s actions honest and ethical, and sometimes that includes reporting unethical behavior.

It’s sad that some companies encourage their employees to report safety violations but not other forms of wrongdoing.  If you find yourself working for a company that consistently punishes employees for reporting wrongdoing, you’re working for an unethical company.  This is not to say that all reports of wrongdoing are founded.  Sometimes there are misunderstandings when people take things out of context or don’t know all the facts.  In these cases, an honest and ethical company will make sure that every employee knows that it’s better to report problems and discover it’s a misunderstanding than to allow real wrongdoing to go unreported.  At some point it will be clear from how your company treats people who report problems whether or not you are working for a company that truly believes in honest and ethical behavior or if they’re just paying lip service to it.

Unless you’re highly placed within the organization, there’s probably little you can do to improve a bad situation and you’ll need to decide whether or not you should stay with that company.  For some managers and workers, the issues may be important enough to put their careers on the line; however, we can both tell you from hard-learned personal experience that we don’t recommend it.  In most cases, it’s better to just quietly leave and find another job than to suffer the emotional and financial turmoil of fighting the system.

How much do you really owe a company that has demonstrated that you will have to commit professional suicide to solve problems?  And, how much do you owe your coworkers balanced against meeting your family’s needs?  At some point, senior management is being willfully ignorant, so if you’re caught in a situation like this, run—do not walk—to the nearest exit!

At your exit interview, resist the temptation to blast them.  Just say that you were ready for a change, smile, and walk away.  Nothing you do at this point will make the slightest bit of difference for those left behind.  Getting ground up by the corporate machine won’t do your former coworkers any good and may ruin your future with a new ethical company.

Deciding to make a difference in the world takes genuine courage.  It’s far easier to keep a low profile and go with the flow than to stick your neck out.  But there are subtler ways to make a difference such as working hard and being honest and ethical in everything you do.  Sometimes this is very difficult when you find yourself working in a den of thieves.

Given Allen’s German heritage and Bryan’s Scottish heritage, it has always come naturally for us to speak our minds.  But you may not have our genetic predispositions, so only you can decide how far you want to stick your neck out.  The old adage, you catch more flies with honey than you do with vinegar really apply here.  Oftentimes you can do more to positively influence others just by doing the little things like working honestly and ethically, and treating others the way you want to be treated.