Lifelong Learning: a lesson from the railroads 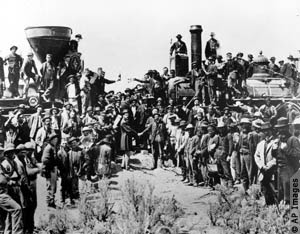 At my college graduation ceremony, the commencement speaker talked about the history of railroads in the United States. I suppose the transcontinental railroad, a major 19th century engineering achievement, was an appropriate motivational topic for a room full of freshly minted engineers ready to make their mark on the world.

As my mind wondered, the old man rambled on about how it took the better part of the 19th century (starting from around 1815) to lay tens of thousands of miles of railroad track crisscrossing the entire nation. His voice grew more intense (and I perked up) as he spoke of the golden age of railroads in the latter half of the 19th century. It was a time when American railroads enjoyed world supremacy and near monopolies. Pacific, Western, Northern, and Southern were household words. It was a time when untold fortunes were made by men like Andrew Carnegie, John D. Rockefeller, and J.P. Morgan.

I was on the edge of my seat when the old man suddenly paused and changed his tone. Due to new competition from other modes of transportation (like automobiles) and more stringent federal regulations, the railroads had fallen into almost a complete state of disrepair by 1920. What took a fortune and almost an entire century to build only took about 20 years to break down! The old man's point was this: you've spent a lot of time and money getting your education, don't let if fall into disrepair by not learning anymore.

Denis Waitley, the author of the book "Empires of the Mind," writes that people think the American dream has been lost. It really hasn't; it's just going to take a lot more effort to get there. The average formal education has a very short shelf life of maybe 18 months, Waitley argues. People need to accept more responsibility for their future by reexamining old paradigms, forming new habits, and taking advantage of every educational and training opportunity that comes their way. Otherwise, the mental railroads we've built could fall into a state of disrepair in less time than we think.
at December 13, 2015