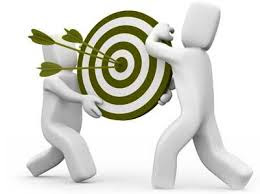 This guest blog comes from my good friend Allen.  Read his blog A Voice in the Wilderness at http://allenandson.blogspot.com/

The extension ladder department that I worked in was producing about 900 feet of ladder a day when I took over as the department manger.  Management offered the workers a bonus on every foot of ladder built over 1,000 feet produced.  So I reorganized the work area to create a better workflow and within a few days the output had risen to 1,200 feet a day.  The workers were overjoyed because without working any harder (just a little smarter) they were earning bonus money.

The factory manager and the owners had seen how much extra money these workers were earning in bonuses every week and decided to move the goal posts.  The workers would now have to produce 1,800 feet of ladder to make their bonuses.

My team worked harder, but was only able to reach 1,500 feet of ladder a day.  So I looked at the workflow again, made some improvements in how the work was performed, and before we all knew it production jumped to 2,000 feet of ladder per day.   Once again my workers made their bonuses.

I started to see the strain in my workers.  In order to produce 2,000 feet of ladder a day, they not only had to work smarter, they had to work much harder as well.  I did what I could to improve moral and keep the work interesting by rotating daily tasks and the like, but I felt my team had reached their maximum potential.

Unfortunately, the factory manager and the owners looked at how much money the workers in my department were making compared with the rest of the factory and moved the goal post yet again to 2,200 feet a day!

My team pushed as hard as they could and finally got up to 2,300 feet a day and earned small bonuses.  But by the end of the next month my workers began to quit in droves.  They were working much harder than the rest of the factory, and they could find less physically demanding work with other companies for the same pay.  And as the experienced workers left, production declined back to 900 feet a day.   So the factory manager and the owners moved the goal post back down to 1,200 feet.

The mentality of the factory manager and owners was “these workers are making too much money, we need to keep that money we’re paying in bonuses for ourselves.”  This kind of short-term thinking caused them to loose two ways in the long-term: first, they didn’t have a dependable production team in that department which could consistently produce 2,000 feet of ladder a day (double what they were originally producing); and second, they didn’t see the improvements I as a foreman made and ask themselves “how can we use these methods in other departments in the factory to raise production?”

As the cycle began to repeat itself I finally recognized the game the factory manager and the owners were playing was nothing more than a sophisticated version of the old “dangle a carrot in front of a donkey trick.”  I soon followed my workers and left for another job!

The last time I heard, they were still stable around 1,000 feet of ladder a day from the same assembly line that had been producing a stable 1,800 feet a day. So much for continuous process improvement!
at October 13, 2013