Red Notice: A True Story of High Finance, Murder, and One Man's Fight for Justice by Bill Browder (2015) - Book Review


My younger brother Todd (MBA from the University of Minnesota) highly recommended this book to me. It was an absolute page-turner; I couldn't put it down. And the amazing thing is that it's completely true! By the end of the book I was crying. (I suspect Hollywood will make this into a movie someday.) 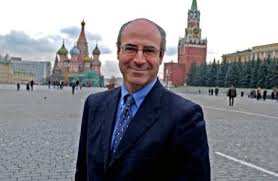 Bill Browder (MBA Stanford Business School) was one of the first western investors in Russia after the fall of communism. He gave up his American citizenship to become a British subject, ostensibly because of his family's ill treatment by the U.S. Government. (His Grandfather, Earl Browder, was the head of the Communist Party USA in the 1930s and 40s and actually ran for President of the US a couple of times.)  Although, I suspect Bill Browder's decision to give up his American citizenship had more to do with taxes than anything else. Be that as it may, his business venture into Russia was undoubtedly motivated by greed. But over the course of the story, he has to face the Russian version of "Profit At Any Price" and learns first hand the meaning of the words of Jesus, "For what shall it profit a man, if he gains the whole world, and loses his own soul?" In the case of Bill Browder, he found his soul and calling in life.
at October 30, 2015 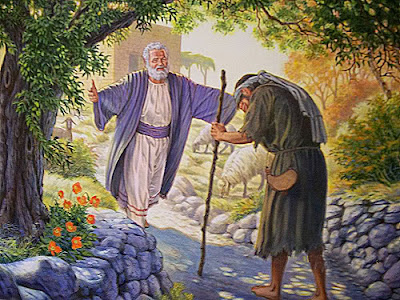 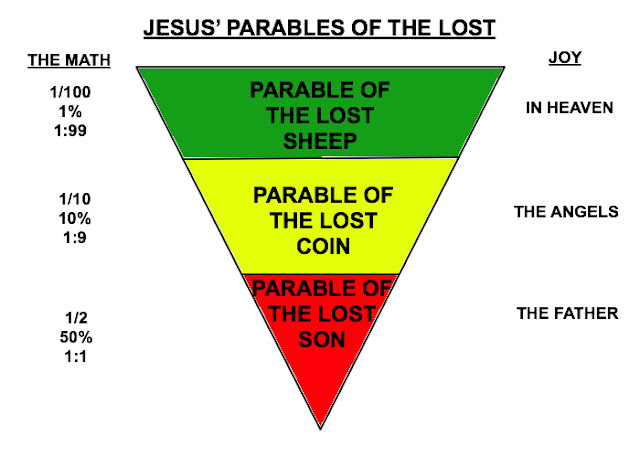 The Parable of the Lost Coin

The Parable of the Lost Coin 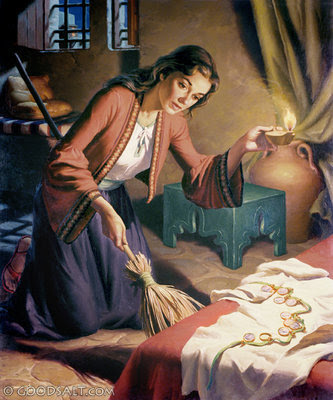 LUKE 15 8 “Or what woman, having ten silver coins, if she loses one coin, does not light a lamp and sweep the house and seek diligently until she finds it? 9 And when she has found it, she calls together her friends and neighbors, saying, ‘Rejoice with me, for I have found the coin which I had lost.’ 10 Just so, I tell you, there is joy before the angels of God over one sinner who repents.”

Like the previous parable of the lost sheep, this parable is also about something that was lost - a coin.  In the culture of Jesus day, the coins (each worth about one days wages) could have been the woman's dowry often worn as ornamental jewelry. (In the picture above you can see the jewelry coins on the bed with one missing.) It would roughly be equivalent to a woman today loosing her engagement or wedding ring; there's sentimental value there. Also, a wedding ring (or in this case, the ornamental coin jewelry) represents the covenant relationship of marriage. The Jewish people had a covenant relationship with God. (The coins also could be the family's emergency savings.)

In the culture of Jesus' day, for a shepherd to lose one sheep from his herd was disappointing yet understandable as all sheep go astray. But for a woman to lose one of her ten wedding coins in her own house was even more disappointing yet still understandable as we all lose stuff from time to time. But think about it for a moment, why would a housewife humiliate herself by telling anyone that one of her wedding coins were lost? Most likely she wouldn't. She'd say to herself, "it'll turn up sooner or later." Why would a housewife completely clean her house just to find one coin? Most likely she wouldn't. It's only worth a days wages and you have to look at the cost/benefit return on investment. One's time would be better spent elsewhere. But this housewife is different.

Notice how Jesus gives an example for men - the lost sheep, and then an example for women - the lost coin? Interestingly, the shepherd in the first parable represents God; in this parable of the lost coin, the poor housewife represents God. We were the insignificant lost sheep in the first parable, and we were the insignificant lost coin in this parable.

So there's a progression of value here: the shepherd loses 1% of his herd; then the housewife loses 10% of her dowry. I'm not sure of the comparative value of one sheep to one coin. Because sheep were so plentiful during Jesus time, maybe one coin would buy 10 sheep. Notice that when the shepherd found his lost sheep, he called his friends and neighbors to celebrate. Similarly there is great joy in heaven over one sinner who repents. In this case, the woman called her friends and neighbors to celebrate her finding her lost coin. Similarly there is great joy among the angels over one sinner who repents.

When the housing and stock market crashed in 2008, people lost large percentages of value in their homes and retirement savings. Like the shepherd and the housewife in these two parables, we too were upset with our losses. And when the housing and stock market eventually bounced back, we celebrated with our neighbors and friends over regaining our lost wealth.  Like this woman in the parable, we too know what it's like to lose and to find.

God feels the same way about each us when we're lost. To God losing any one of us is like losing 1% of our sheep herd, or like losing 10% of our life savings. Each of us is worth diligently searching for. And when He finds us He's so happy that He calls for a big celebration in Heaven and among the Angels! These are just two examples of God's incredible love for us.
at October 28, 2015