“Get rid of Pride and Riches will do no harm!”
—St. Augustine of Hippo 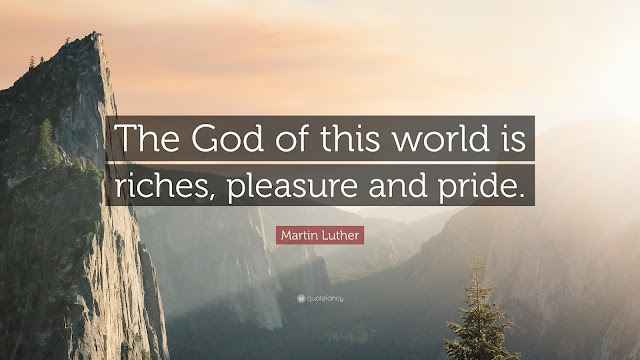 Sometime around the year 400, there was a monk named Pelagius who, while living in the city of Rome, became concerned about poverty and the oppression of the poor by the rich.  And he conceived a simple solution: “Get rid of the rich and you will find no poor!”  In other words, he believed that the rich were the cause of poverty because they oppressed the poor, so if they just outlawed being rich then that would solve the problem of poverty.

In response to Pelagius’ idea, St. Augustine of Hippo said, “Get rid of pride and riches will do no harm!”  In other words, Augustine believed that it was the pride of the rich that was the real cause of poverty and oppression of the poor.  Augustine didn’t buy into Pelagius’ argument that the divisions in the world were between the rich and the poor, but rather it was between the proud and the humble.  He believed that the inequality of wealth and power was a fact of life.  But if the rich stopped abusing their power and practiced humility instead then that would solve the problems of poverty and the oppression of the poor.

In ancient Roman culture, there was a belief that the rich could rule the city provided they treated those below them well and showed “civic love” by spending money to maintain the economy and provide work for the poor.  Augustine added to this belief by saying that the rich should also abandon their pride (instead of their wealth) and give alms to the poor.  There were “good rich people” and there were “bad rich people.”  The “good rich people” treated those below them well, practiced humility and did not abuse their power, and they shared their wealth with society through their spending and alms giving.  The “bad rich people” did none of these.

Over time, Augustine’s view on riches proved to be exactly right.  When communism reared its ugly head in the early 20th century they did exactly what Pelagius proposed: they outlawed being rich.  But it didn’t solve the problems of poverty as those in power abused their authority and oppressed the poor.  The communist leaders weren't rich but they were still full of pride.  The failure of communism proved that the divisions in the world were not between the rich and the poor, but rather between the proud and the humble as Augustine said.  Wealth is not the problem in and of itself; the real problem is pride!

Nowhere in the Bible does it ever condemn being rich…what it condemns is the love of riches.  St. Paul in his first letter to the Bishop Timothy (6:10) wrote, “For the love of money is the root of all evil.”  Jesus said in Matthew 19:24, “It’s easier for a camel to go through the eye of a needle, than for a rich man to enter into the kingdom of God.”  Why is it so difficult for a rich person to go to heaven because they love riches more than God and their fellow man?

Jesus also said in Matthew 6:24, “No one can serve two masters. Either you will hate the one and love the other, or you will be devoted to the one and despise the other. You cannot serve both God and money."  Jesus was talking about keeping our priorities straight.  Obviously, we all need money to live.  Jesus needed money too, but interestingly he gave the coin purse to the man who would betray him for thirty pieces of silver.  When we keep our priorities straight, we put God first, others second, and ourselves third.  And money should be really low on our priority list.
at August 09, 2017