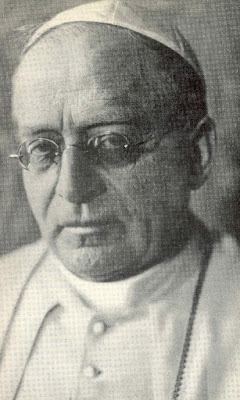 It was the Christmas season in 1922 when the world was still reeling from the aftermath of  the Great War (WWI) when Pope Pius XI published his encyclical "Ubi Arcan Dei Consilio" or "On the Peace of Christ in the Kingdom of Christ."

The first World War began in 1914 following the assassination of Austrian Archduke Ferdinand and his wife in Sarajevo (in modern day Bosnia and Herzegovina), and ended on the eleventh hour, of the eleventh day, of the eleventh month in 1918 (a day we now celebrate in America as Veteran's Day).  The War resulted in close to 40 million casualties and losses on both sides, a number which is incomprehensible by today's standards!

Pius wrote, "Since the close of the Great War individuals, the different classes of society, the nations of the earth have not as yet found true peace...the old rivalries between nations have not ceased to exert their influence...Whence it is that the nations of today live in a state of armed peace which is scarcely better than war itself, a condition which tends to exhaust national finances, to waste the flower of youth, to muddy and poison the very fountainheads of life, physical, intellectual, religious, and moral."

Pius went on to write that he attributed much of society's ills to an inordinate desire for pleasure, possessions, and power over others. He deplored the rise of class divisions and unbridled nationalism and greed, and held that true peace can only be found under the Kingship of Christ as The Prince of Peace. He wrote, "For Jesus Christ reigns over the minds of individuals by His teachings, in their hearts by His love, in each one's life by the living according to His law and the imitating of His example...we forget that all men are our brothers and members of the same great human family, that other nations have an equal right with us both to life and to prosperity."

Three years later during the Christmas season in 1925, Pope Pius XI published a followup to his 1922 encyclical "Ubi Arcan Dei Consilio" called "Quas Primas" or "In the First." And it established "The Feast of Christ the King" which is now celebrated on the last Sunday of the Church's Liturgical Year.

Pius wrote that Jesus' Kingship was given to him by His Father and it wasn't obtained through violence. Consequently, Jesus Christ has dominion over all creatures and kingdoms of the world. The Feast of Christ the King was instituted to remind all Christians that their allegiance was to their spiritual ruler in heaven, Christ the King who rules both heaven and earth, as opposed to their earthly rulers here on earth.

The Kingdom of God is not an earthly kingdom based on human power but a spiritual kingdom based on loving God and loving and serving others. All power in heaven and on earth has been given to Christ. It's He who establishes and disestablishes kings and kingdoms on earth and they are all His subjects. Even evil earthly kings and kingdoms are unwittingly instruments of God's plans.

Bringing Down a Russian Spy on Wall Street by Garrett M Graff, BloombergBusinessweek