(The following was taken from a Wikipedia article)  Saint Francis was an Italian Catholic friar and preacher.  He founded the men's religious Order of Friars Minor (OFM or the Franciscans), the women’s Order of St. Clare (the Poor Clares), and the Order of Brothers and Sisters of Penance (the Third Order) for men and women not able to live the lives of itinerant preachers.  Though he was never ordained to the Catholic priesthood, Francis is one of the most venerated religious figures in history.

Francis' father was a prosperous silk merchant.  Francis lived the high-spirited life typical of a wealthy young man, even fighting as a soldier for Assisi.  While going off to war in 1204, Francis had a vision that directed him back to Assisi, where he lost his taste for his worldly life.  On a pilgrimage to Rome, he joined the poor in begging at St. Peter's Basilica.  The experience moved him to live in poverty.  Francis returned home, began preaching on the streets, and soon amassed a following.  His Order was authorized by Pope Innocent III in 1210.

In 1219, he went to Egypt in an attempt to convert the Sultan to put an end to the conflict of the Crusades.  In 1224, he received the stigmata, making him the first recorded person to bear the wounds of Christ's Passion.  He died during the evening hours of October 3, 1226, while listening to a reading he had requested of Psalm 140.

On July 16, 1228, he was pronounced a saint by Pope Gregory IX. He is known as the patron saint of animals, the environment, and is one of the two patron saints of Italy (with Catherine of Siena).  It is customary for Catholic and Anglican churches to hold ceremonies blessing animals on his feast day of October 4.  He is also known for his love of the Eucharist, his sorrow during the Stations of the Cross, and for the creation of the Christmas Nativity Scene.

We are not all called to live a life of poverty as Saint Francis was, but he is an excellent roll model for us to follow.  In a world that lives by a "profit at any price" attitude, it's grounding to keep in mind the example of Saint Francis that money can't buy lasting happiness. 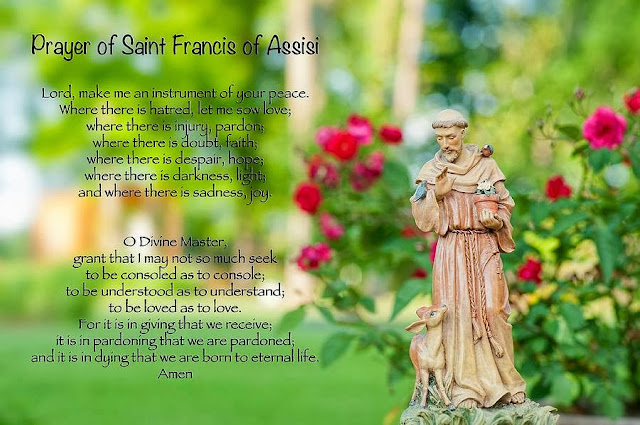 Those with the most gold get to rule

Thank you Allen for sending me this article found at:  http://mac360.com/2013/10/apple-and-the-21st-century-golden-rule-those-with-the-most-gold-get-to-rule/

This is an example of Accounting & Finance 101: when a startup company needs to raise capital they go to Wall Street and have an Initial Public Offering (IPO).  They offer shares of ownership in the company at a certain price (let's say $10.00 per share to make the math easy).  They raise $1,000,000, which would be 100,000 shares of ownership in the company.  After that, the startup company doesn't make anything if their share price increases (say to $20.00 per share); that profit goes to the person who bought the shares at $10.00.

Now that the Accounting & Finance 101 lesson is over, my take is this is just another example of greed and "profit at any price" thinking.  This relates to the article I wrote previously call "If you had all the money in the world".

Thursday, October 3, 2013 | Kate MacKenzie Posted In News and Comment
Apple is a money making machine and that’s not in dispute by the legions of Apple watchers, technology pundits, or anyone on Wall Street.
What’s really at issue is what Apple should do with all those billions in riches, right? The options are numerous. Sit on the cash. Give cash to shareholders. Buy stock to inflate the stock price. Acquire a company or buy into new technology.
My personal fear is that the 21st century Golden Rule will apply to Apple’s future.

A Circle Of Sharks

The option that scares me the most is one proffered by none other than corporate raider and shark extraordinaire, Carl Icahn who wants Apple to buy back $150-billion in stock.
Apple has about $150-billion in cash. Does the option to spend it all on stock make sense? It does if you apply the 21st century Golden Rule.
Icahn claims to have $2-billion in Apple stock. If the stock goes up, Icahn becomes richer than rich. If the stock stagnates, Icahn becomes a publicly noisy shareholder (but still rich).
It would be less expensive for Apple to give Icahn $3-billion for his $2-billion worth of stock just to make him go away. That, however, sets a bad precedent for the future.
The problem I have with this whole ‘return of capital to Apple’s shareholders‘ movement is that it’s based on a false premise. As a company, Apple gains little from an exuberant stock price, and loses little from a crazy low price-to-earnings ratio and a low stock price. What does Apple gain by giving money to shareholders in the form of a dividend or a stock buy back?
Less noisy shareholders. Otherwise, what’s the point?
Icahn did not give Apple $2-billion in exchange for stock. Apple doesn’t profit from Icahn as a shareholder. Only Icahn profits, and only if Apple’s stock rises, or Apple’s dividends grow, or the company buys its own stock to temporarily inflate the stock price.
To the extent that Icahn and other sharks can intimidate or influence Apple’s executives and board of directors in his favor, the new Golden Rule applies. Those with the most gold get to rule.
What disappoints me about Apple is that the company is not creative enough or daring enough to know what to do with $150-billion in cash other than to give it away to shareholders who don’t provide anything in return. Apple’s shareholders don’t invest in Apple. They invest in Apple’s stock in a form of legalized and popular Las Vegas-like betting on the price.
Those with the most gold can influence Apple’s decision making in ways not available to you or me. That’s the new Golden Rule.