WHY IS THERE SO MUCH EVIL IN THE WORLD? 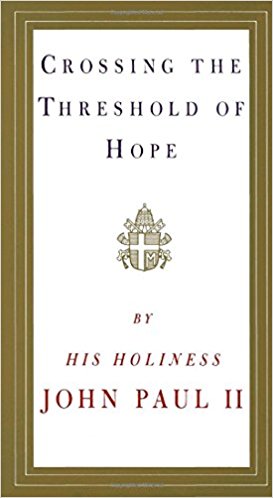 Your words open up for us grand and fascinating prospects that, for believers, are certainly further confirmations of their hope. And yet, we cannot forget that in every century, at the hour of truth, even Christians have asked themselves a tormenting question: How to continue to trust in a God who is supposed to be a merciful Father, in a God who-as the New Testament reveals-is meant to be Love itself, when suffering, injustice, sickness, and death seem to dominate the larger history of the world as well as our smaller daily lives?

Stat crux dum volvitur orbis (The Cross remains constant while the world turns). As I stated earlier, we find ourselves at the center of the history of salvation. Naturally you could not fail to bring up that which is the source of recurring doubt not only in regard to the goodness of God but also in regard to His very existence. How could God have permitted so many wars, concentration camps, the Holocaust?

Is the God who allows all this still truly Love, as Saint John proclaims in his First Letter? Indeed, is He just with respect to His creatures? Doesn't He place too many burdens on the shoulders of individuals? Doesn't He leave man alone with these burdens, condemning him to a life without hope? So many incurably ill people in hospitals, so many handicapped children, so many human lives completely denied ordinary happiness on this earth, the happiness that comes from love, marriage, and family. All this adds up to a bleak picture, which has found expression in ancient and modern literature. Consider, for example, Fyodor Dostoyevsky, Franz Kafka, or Albert Camus.

God created man as rational and free, thereby placing Himself under man's judgment. The history of salvation is also the history of man's continual judgment of God. Not only of man's questions and doubts but of his actual judgment of God. In part, the Old Testament Book of Job is the paradigm of this judgment. There is also the intervention of the evil spirit, who, with even greater shrewdness than man, would judge not only man but God's actions in human history. This too is confirmed in the Book of Job.

Scandalum Crucis (The Scandal of the Cross). In the preceding questions you addressed the problem precisely: Was putting His Son to death on the Cross necessary for the salvation of humanity?

Given our present discussion, we must ask ourselves: Could it have been different? Could God have justified Himself before human history, so full of suffering, without placing Christ's Cross at the center of that history? Obviously, one response could be that God does not need to justify Himself to man. It is enough that He is omnipotent. From this perspective everything He does or allows must be accepted. This is the position of the biblical Job. But God, who besides being Omnipotence is Wisdom and-to repeat once again-Love, desires to justify Himself to mankind. He is not the Absolute that remains outside of the world, indifferent to human suffering. He is Emmanuel, God-with-us, a God who shares man's lot and participates in his destiny. This brings to light another inadequacy, the completely false image of God which the Enlightenment accepted uncritically. With regard to the Gospel, this image certainly represented a step backward, not in the direction of a better knowledge of God and the world, but in the direction of misunderstanding them.

No, absolutely not! God is not someone who remains only outside of the world, content to be in Himself all-knowing and omnipotent. His wisdom and omnipotence are placed, by free choice, at the service of creation. If suffering is present in the history of humanity, one understands why His omnipotence was manifested in the omnipotence of humiliation on the Cross. The scandal of the Cross remains the key to the interpretation of the great mystery of suffering, which is so much a part of the history of mankind. Even contemporary critics of Christianity are in agreement on this point. Even they see that the crucified Christ is proof of God's solidarity with man in his suffering. God places Himself on the side of man.

He does so in a radical way: "He emptied himself, / taking the form of a slave, / coming in human likeness; / and found human in appearance, / he humbled himself, / becoming obedient to death, / even death on a cross" (Phil 2:7-8). Everything is contained in this statement. All individual and collective suffering caused by the forces of nature and unleashed by man's free will-the wars, the gulags, and the holocausts: the Holocaust of the Jews but also, for example, the holocaust of the black slaves from Africa.

WHY DOES GOD TOLERATE SUFFERING?

The objection of many people to the previous response is well known-the question of pain and evil in the world is not really faced but only displaced. Faith affirms that God is omnipotent. Why, then, hasn't He eliminated-and does He persist in not eliminating-suffering in the world He created? Aren't we being presented with a sort of "divine impotence," the kind spoken of even by people who are sincerely religious, though perhaps deeply troubled in their faith?

Yes, in a certain sense one could say that confronted with our human freedom, God decided to make Himself "impotent." And one could say that God is paying for the great gift bestowed upon a being He created "in his image, after his likeness" (cf. Gn 1:26). Before this gift, He remains consistent, and places Himself before the judgment of man, before an illegitimate tribunal which asks Him provocative questions: "Then you are a king?" (cf. Jn 18:37); "Is it true that all which happens in the world, in the history of Israel, in the history of all nations, depends on you?"

We know Christ's response to this question before Pilate's tribunal: "For this I was born and for this I came into the world, to testify to the truth" (Jn 18:37). But then: "What is truth?" (Jn 18:38), and here ended the judicial proceeding, that tragic proceeding in which man accused God before the tribunal of his own history, and in which the sentence handed down did not conform to the truth. Pilate says: "I find no guilt in him" (Jn 18:38), and a second later he orders: "Take him yourselves and crucify him!" (Jn 19:6). In this way he washes his hands of the issue and returns the responsibility to the violent crowd.

Therefore, the condemnation of God by man is not based on the truth, but on arrogance, on an underhanded conspiracy. Isn't this the truth about the history of humanity, the truth about our century? In our time the same condemnation has been repeated in many courts of oppressive totalitarian regimes. And isn't it also being repeated in the parliaments of democracies where, for example, laws are regularly passed condemning to death a person not yet born? . . .

God is always on the side of the suffering. His omnipotence is manifested precisely in the fact that He freely accepted suffering. He could have chosen not to do so. He could have chosen to demonstrate His omnipotence even at the moment of the Crucifixion. In fact, it was proposed to Him: "Let the Messiah, the King of Israel, come down now from the cross that we may see and believe" (Mk 15:32). But He did not accept that challenge. The fact that He stayed on the Cross until the end, the fact that on the Cross He could say, as do all who suffer: "My God, my God, why have you forsaken me?" (Mk 15:34), has remained in human history the strongest argument. If the agony on the Cross had not happened, the truth that God is Love would have been unfounded.

Yes! God is Love and precisely for this He gave His Son, to reveal Himself completely as Love. Christ is the One who "loved to the end" (Jn 13:1). "To the end" means to the last breath. "To the end" means accepting all the consequences of man's sin, taking it upon Himself. This happened exactly as the prophet Isaiah affirmed: "It was our infirmities that he bore, / We had all gone astray like sheep, / each following his own way; / But the Lord laid upon him / the guilt of us all" (Is 53:4-6).

The Man of Suffering is the revelation of that Love which "endures all things" (1 Cor 13:7), of that Love which is the "greatest" (cf. 1 Cor 13:13). It is the revelation not only that God is Love but also the One who "pours out love into our hearts through the Holy Spirit" (cf. Rom 5:5). In the end, before Christ Crucified, the man who shares in redemption will have the advantage over the man who sets himself up as an unbending judge of God's actions in his own life as well as in that of all humanity.

Thus we find ourselves at the center of the history of salvation. The judgment of God becomes a judgment of man. The divine realm and the human realm of this event meet, cross, and overlap. Here we must stop. From the Mount of the Beatitudes, the road of the Good News leads to Calvary, and passes through Mount Tabor, the Mount of the Transfiguration. The difficulty and the challenge of understanding the meaning of Calvary is so great that God Himself wanted to warn the apostles of all that would have to happen between Good Friday and Easter Sunday.

This is the definitive meaning of Good Friday: Man, you who judge God, who order Him to justify Himself before your tribunal, think about yourself, if you are not responsible for the death of this condemned man, if the judgment of God is not actually a judgment upon yourself. Consider if this judgment and its result-the Cross and then the Resurrection-are not your only way to salvation.

When the archangel Gabriel announced to the Virgin of Nazareth the birth of the Son, revealing that His Reign would be unending (cf. Lk 1:33), it was certainly difficult to foresee that those words augured such a future; that the Reign of God in the world would come about at such a cost; that from that moment on the history of the salvation of all humanity would have to follow such a path.

Only from that moment? Or also from the very beginning? The event at Calvary is a historical fact. Nevertheless, it is not limited in time and space. It goes back into the past, to the beginning, and opens toward the future until the end of history. It encompasses all places and times and all of mankind. Christ is the expectation and simultaneously the fulfillment. "There is no salvation through anyone else, nor is there any other name under heaven given to the human race by which we are to be saved" (Acts 4:12).

Christianity is a religion of salvation-a soteriological religion, to use the theological term. Christian soteriology focuses on the Paschal Mystery. In order to hope for salvation from God, man must stop beneath Christ's Cross. Then, the Sunday after the Holy Sabbath, he must stand in front of the empty tomb and listen, like the women of Jerusalem: "He is not here, for he has been raised" (Mt 28:6). Contained within the Cross and the Resurrection is the certainty that God saves man, that He saves him through Christ, through His Cross and His Resurrection.
at February 23, 2018