The Stop Sign Theory of Civilization by Allen Laudenslager 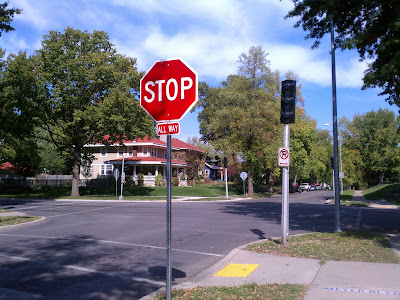 What is the goal of a society? It's simply to make civil life possible. We make life civil and fair by making and enforcing rules that we all have to live by. Essentially it's the stop sign theory of civilization. By this I mean that if we ALL stop for every stop sign whether or not there's a policeman nearby then each of us gets through our days with fewer accidents and tickets. Yes, it'll take each of us a bit longer for each trip, but it works out better for ALL of us over our lifetimes.


The same is true for things like taxes. We may have a bit smaller amount of spending money after each payday, but the improvements to our society make ALL our lives better. Think of our Interstate Highway system. We all chip in and we all benefit. Or think of the Tennessee Valley Authority (TVA) that built the dams in the south. We took tax money from the richer northern states and diverted it to the poorer southern states to build dual purpose dams for flood control and hydroelectric power generation. That capacity helped the people in those poor areas become more productive. Factories were built and farms that used to flood are now more productive.

The problem today is that some people have figured out how to manipulate the political system in order to get special dispensations from paying their fair share of taxes. Using the stop sign theory they got a dispensation to not have to stop for stop signs! The problem with stop sign dispensations is that we may be driving through that intersection when the guy with the dispensation blows right through and hits us! With the kind of economic privilege that tax breaks confer the damage to society is not as obvious to the bystanders as the remains of wrecked cars in the intersection.

In the eyes of the law corporations are people with the same civil right that you and I enjoy. But corporations can't go to prison if they commit crimes. Our society only charges individuals with crimes and may sentence them to prison if they're convicted. Essentially corporations have been granted a dispensation from criminal prosecution and imprisonment if they break the law. The most they'll get is a fine. But given the huge amount of revenue corporations earn, fines to them are like a moving violation to us if we rolled through a stop sign.

Here are some simple changes we should consider. How about passing a law or constitutional amendment revoking corporate personhood. Corporations are not people; rather they're a business and as such all their speech is advertising which is only protected by the rules of business and not the more expanded rules that protect individual free speech.

Third, corporate officers should be held criminally liable for illegal activity or negligence done by the corporation. In making their managerial decisions, did they do the things that a reasonable and prudent person would do? On a snowy road a reasonable and prudent person might drop their driving speed from the legal limit of 55 MPH to a more prudent speed of 35 MPH. The person driving 55 MPH and causes an accident might be charged with reckless driving. It should be the same with corporate decisions.

Someone might argue that no one would want to become a corporate manager if they could be charged for bad decisions; that is a valid point, but I believe there will always be people who want to be managers, and the fear of being charged criminally will constrain their decision making in exactly the same way that the fear of an accident or moving violation constrains most drivers to stop at stop signs.
at April 09, 2016