The Cost of Bad Behavior in the Workplace

The Cost of Bad Behavior in the Workplace
by Bryan J. Neva, Sr. 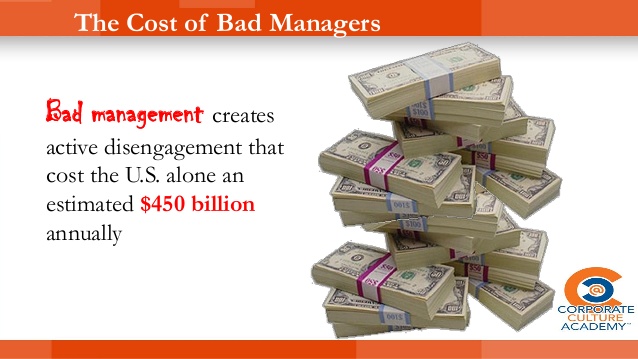 It's hard to quantify how much bad behavior costs organizations, but I'd bet that conservatively it's probably hundreds of billions of dollars in lost productivity and opportunities every year.

I'll give you an example. A good employee arrives back at work Monday morning after being on vacation for a week. He's refreshed after his vacation, in a good mood, and ready to tackle the work at hand. He goes through his accumulated email and discovers that his boss held a very important meeting with the team in his absence. So he walks over to his boss' office and asks about the meeting and what he missed. His boss rudely tells him he's too busy to repeat what was in the meeting and that it was his own fault he missed the meeting (even though he was on scheduled vacation). The good employee walks away humiliated and dejected.

Because he's only human, the employee doesn't accomplish much for the rest of day or the rest of the week for that matter. In fact, he's gotten so frustrated with his boss' consistent bad behavior, he spends a good part of the week updating his resume and applying for other jobs. It's only human to get even with his boss through passive aggressive behavior like this. The boss' bad behavior probably cost his organization over $1000.00 in lost productivity that one week!

Just like his boss, it wasn't right of the employee to behave badly either through his passive aggressive behavior. But people are only human and they tend to respond in kind when treated badly. It's a vicious cycle.

This is just one little example, but I could provide thousands of anecdotal examples of bad behavior in the workplace that cost organizations a lot more than just a thousand bucks! Just read through all of my past blog posts and you'll get the idea. And these are just my experiences! Multiply that by all the workers in the U.S. and you'll realize how expensive bad behavior is to the bottom line of any organization.